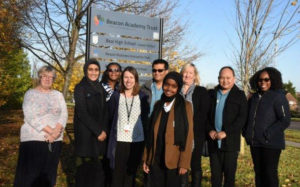 Beal High School pupil Aliyah Haynes with staff from the school and hospital.

A brave 12-year-old pupil is delivering a presentation to the whole of her school about living with sickle cell disease.

Aliyah Hayes was diagnosed at five months old and is raising awareness about her condition through a series of assemblies at Beal High School, Woodford Bridge Road, Redbridge.

Her mother, Mehmuna Mallu, said Aliyah wants to raise awareness and become a positive role model. She praised the school and explained that they have been very considerate of her daughter’s needs.

“Inevitably, it being such a large school, I was anxious and worried about her wellbeing,” said Mehmuna. “All of the teachers I have spoken to have been so welcoming and understanding about her condition.

“They have given me peace of mind in knowing that Aliyah will be well taken care of during the school day.” Sickle cell is a hereditary disease that affects the way in which red blood cells carrying oxygen travel around the body. A regular red blood cell is shaped like a doughnut, whereas sickle red blood cells are crescent-shaped.

As a result, it is difficult for cells to pass through the body and they often get trapped which can cause complications. Mehmuna added: “The school has been very accommodating by giving her a medical pass which means that if she is ever feeling unwell she can be excused from any lesson without the need to explain to every teacher as to why she is not well. “This has made her feel comfortable and a valued student of the school.”

Director of achievement and progress for Year 7, Rebecca Wills said: “Aaliyah has made the brave decision to stand up in front of her peers, alongside some of the healthcare professionals, to lead assemblies raising awareness of her condition and demonstrating that, despite seeming limitations, she has chosen to seize as many opportunities as she can.

“We hope students will stand with us to celebrate her bravery but at the same time be encouraged to know that although we are all different and have our individual struggles as a community we can support each other to reach our full potential.”