This weekend I was at the German G1 world Ranking event and took home a silver medal. I had 5 tough fights in total, against Germany, Netherlands, UAE , and Hong Kong. I had the hardest side if the draw but took it one fight at a time.

I managed to stop my first opponent from Germany with a technical knockout after some strong punches. That was my game plan to slow them down. This strategy worked well for me. My hardest match I ever fought was in the semi-final, because everyone wants to reach the final. I was up against a very strong fighter from Hong Kong. He took a massive lead early on, I was always trying to get back in the match. But I didn’t give up. In the final round, I managed to pull back the fight to 11-13 to him. It was 9 seconds to go and I scored with a strong punch followed up by a quick kick to the body and took the lead 14-13. Somehow I held the lead to the final bell. I was tired but happy that I had finally made it.

The worse thing for me the Final was immediately the next fight. I had no time to recover. In the final, I lost to a GB team mate and a club mate. Obviously, I would have liked the Gold, but I settled for silver. I really enjoyed the experience.

I would just like to thank the school for supporting me throughout my taekwondo events. Also, I have attached some photos, one is of the Honk Kong player who was a sportsman and wished me luck in the final. It’s nice to meet people from all over the world. 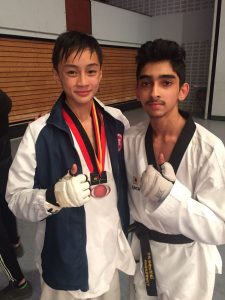