Redbridge pupils battle it out in a war of words 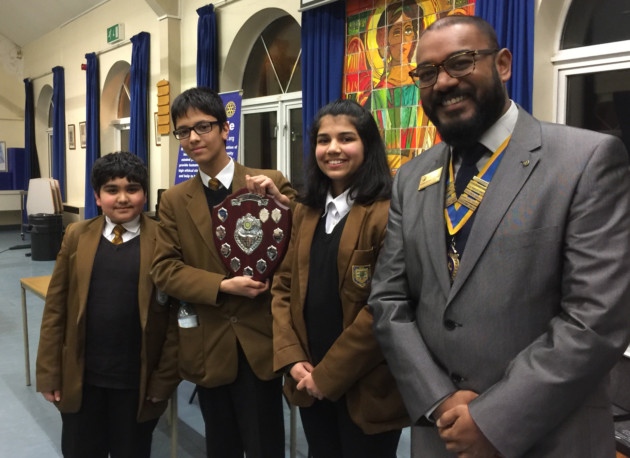 Teenagers proved they had the gift of the gab as they went head to head in a public speaking competition.

The annual competition, organised by Rotary clubs in Redbridge, challenges the students to present a thought-provoking subject to an audience.

The teams, each consisting of three students, presented their subject to an audience of Rotarians and guests for 10 minutes.

Winners included a team from Beal High School, Woodford Bridge Road, Redbridge- on the topic of reading – and Chigwell School, High Road, Chigwell, who spoke about the Monarchy.

The Intermediate winner was Hari Vadher and the Senior winner was Christopher Collins, both of Chigwell School.

The winning schools were presented with trophies and shields

A spokeswoman said: “The standard was exceedingly high and the subjects were very diverse and extremely interesting.”

The late Janet Gilbert, a member of Barkingside Rotary Club who organised this competition for many years was honoured with two special prizes awarded in her memory.

They were awarded to the competitors who made the biggest impression on the judges. Her husband Henry Gilbert presented the awards in honour of his late wife.